cURL with proxy is the easiest method for transferring data since it does not need a UI to be a support system for several protocols.

The cURL on the other hand is viewed as a communicator. It allows you to communicate with a server by defining the destination (which is most of the time in the form of a URL) and the information you wish to transmit. Almost all devices that send data over various internet protocols have cURL integrated into them.

This blog will walk you through using proxy with cURL to keep things simple. You can see this as a step-by-step guide on using cURL with proxy. Hence before you begin to cURL, I advise that you have a solid grasp of what proxies are and how to use them in browsers. This fundamental understanding will be quite helpful throughout this entire blog.

Are you new to this? First, become familiar with using proxies in this article on residential proxy vs data center proxy.

What Is cURL and Why Use It? 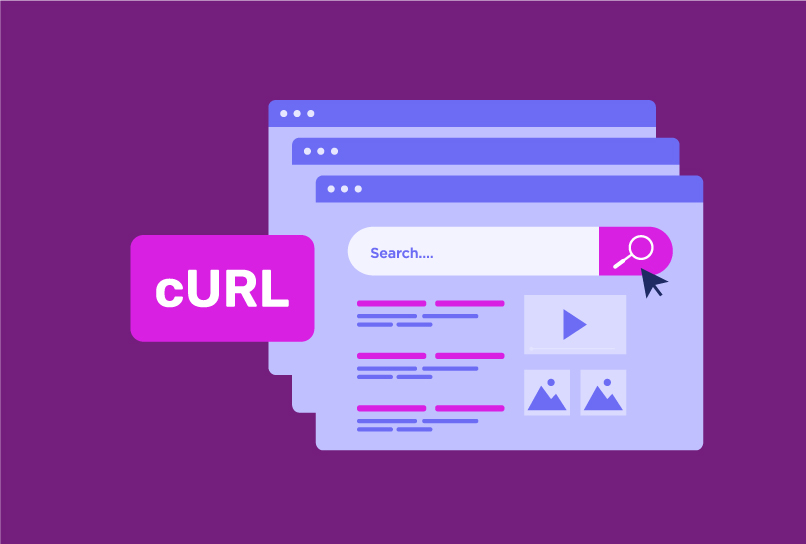 This article will focus on cURL and the wide range of functions it performs to benefit you as a developer, programmer, or simply a user of its features.

The command line utility cURL, also pronounced curl, means Client URL. cURL is a command line tool used to transport data to and from servers without requiring user input. You can use cURL to limit bandwidth, support proxies, authenticate users, support proxies, authenticate users, and many other things. This data is sent and received from different servers using the URL syntax:

Client-side URL transmission software called libcURL command is used by the cURL command and supports close to 25+ protocols and formats. With one of the supported protocols including HTTP, HTTPS, SCP, SFTP, and FTP, you can download data using the cURL command.

cURL makes use of a transmission software called LibcURL. Below is a brief description of libcURL’s features:

The library for multiprotocol file transfers when using cURL with proxy is called libcurl. A few of the client-side URL transfer protocols that are supported by the libcURL library are TELNET, TFTP, LDAP, and more

On this planet, libcURL is perhaps the most versatile, robust, and frequently used network transfer library.

The protocol is the language used to request data to be transferred, either in one way or the other. The protocol outlines precisely how to inform the server that data is on the way or to ask for data from it.

Protocols are often specified by the IETF (Internet Engineering Task Force), which is home to RFC papers that detail every aspect of how each protocol operates, including how clients and servers should behave, what data to deliver, and so on.

What Protocols Does cURL Support?

cURL supports protocols that provide “data transfers” in either or both directions. Since cURLmainly uses URLs (actually, URIs) as the input key that describes the transfer, we often limit ourselves to protocols that have a “URI format” specified in an RFC or are at least somewhat common.

As of this writing, the most recent version of cURL supports the following protocols:

The protocols often come in many versions or flavors, which further complicates problems.

The HTTP protocol is what cURL by default utilizes. cURL may also utilize the following protocols and file types:

Files are sent via file transfer protocol from a server to a user. To upload these types of files, combine cURL with this protocol

An effective substitute for a typical FTP client is cURL. In a prior article, we gave a detailed description of SOCKS vs HTTP, you can check it out for more explanation.

For transferring data to an SMTP server using the Simple Mail Transfer Protocol. Your text, the sender, and the recipient are all included in this data. Here’s how it appears:

Access to dictionaries is made possible through the Dictionary Network Protocol. You execute the following command using cURL while using it.
[ dict:/dict.org/d:hi” ] in a URL.
You get a response from this command that includes the Dictionary you specified and the definition of ‘hi’ inside.

cURL is commonly utilized by developers because it is versatile and effective. It can be used for a variety of functions including:

cURLs’ most fundamental use case is downloading and uploading whole web pages using any of the supported protocols or formats.

The Differences Between Curl and Wget 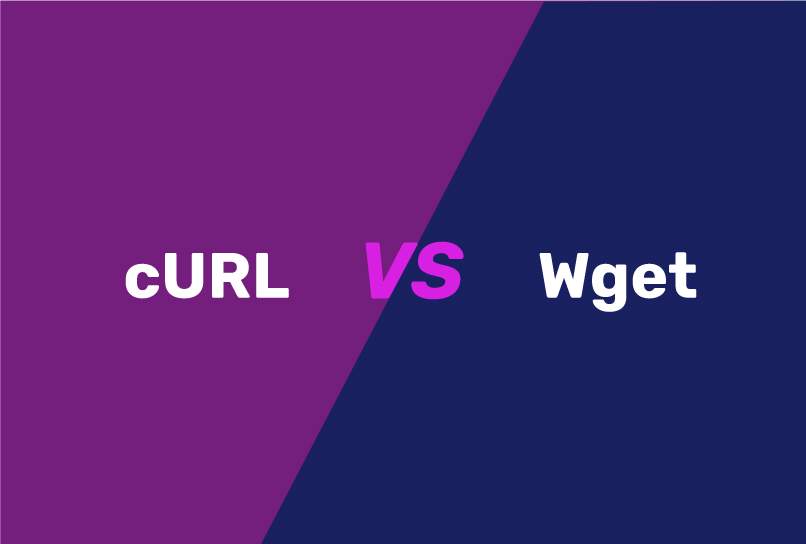 For a better understanding of how to use cURL with proxy, we have to know the similarities and differences between the cURL proxy command and the Wget command.

What Is the Wget Command?

Wget is a free Network file downloaded and command-line tool that has several features that make downloading files simple, such as:

The syntax for Wget is as follows:
Wget [option] [URL] for $

cURL vs Wget: What Do Both Commands Do?

How Do cURL and Wget Vary?

For a better knowledge of how both cURL and Wget operate, let us look at how they both function differently. Understanding their functions individually helps to know what makes them unique and distinct.

When to Use either cURL or Wget

3 Ways of Using cURL With Proxy

Let’s go over how you can send data over a proxy server using the cURL command line tool, in between a user and a destination server with a proxy server as a middleman.

Below is a detailed explanation of how you can use cURL with proxy in 3 different ways:

Utilizing a command line parameter is the first and most straightforward method of using cURL with proxy. The command line has different options. We will be discussing the short option and long options.

Command-line options
When instructing curl to do a task, you run it with zero, one, or several command-line arguments together with the URL or collection of URLs you want the transfer to be about. More than 200 distinct options are supported by the curl

cURL receives instructions about how you want it to behave via command line arguments. For instance, you may use the -v option to tell curl to use verbose mode:
cURL —version http://example.com

Here, the “short option” -v is used. Those are written with a single letter directly after the negative sign, as shown.

Since there are just a few letters in the alphabet and there are many variables to be controlled, not all choices are accessible as single-letter alternatives, however, they are quick to compose and utilize. There are consequently long option names offered for such.

Additionally, the majority of short choices have longer name aliases as a convenience and to make scripts easier to understand.

Long options are usually typed with two dashes before the name, and only one option name may be written per double-minus.

Using cURL with proxy involves Curl checks to determine whether a proxy is asked to be used, for the presence of specifically defined environment variables.
A variable called [scheme] proxy, which stores the proxy host name, is set to indicate the proxy (the same way you would specify the host with -x).

The ‘HTTP proxy’ environment option must be set if you wish to instruct curl to utilize a proxy when it accesses an HTTP server. Much like this:

Even while the aforementioned example uses HTTP, you may of course also specify Ftp proxy, HTTPS proxy, and other types of proxies. Except for the HTTP proxy, all of the names of these proxy environment variables may also be given in capital letters, such as HTTPS PROXY.

All protocols may be controlled by a single variable, called ALL PROXY.

The NO PROXY on the other hand  variable is used this way:
Put a list of host names separated by commas that shouldn’t be accessible using a proxy in that field. To match all hosts, you may specify NO PROXY as a single asterisk (‘*’).

There is also a command line option called —no proxy that does the same task and functions similarly to the NO PROXY setting.

Setting up a config file might be useful for those who wish to use cURL with a proxy professionally and extract large volumes of data. Those who previously couldn’t specify an environment while using cURL command-line parameters on Windows may now do so using this method.

Simply said, this enables you to save the desired settings in a text file inside your system directory and then use it to modify your environment.
The benefits are clear.

You may save time and stop worrying about configuring an environment every time by generating several commands inside the config file.

Web scraping is a method of obtaining information from websites using a scraping bot, so the whole process is automated. The method enables quick, large-scale access to online data for users.

Curl may assist you in avoiding boring activities by automating the repetitious web scraping process. You must use PHP for it.

You can also quickly get a web page’s whole content using only one line of cURL code. Small-scale web scraping won’t cause issues, but as you make more queries, anti-bot systems may become active.

A helpful hint is to always follow the website’s regulations and avoid attempting to access password-protected material, which is often illegal or at the very least frowned upon.

Overall, using cURL with proxy is a versatile method that allows you to accomplish virtually any task, including making requests and configuring proxies.

As vast as Wget can be, cURL performs more in-depth HTTPS authentication than any other command line tool. With what we discussed so far, I bet you are considering giving cURL a shot. If you aren’t already, you should. Keep it cURLy (pun intended).

Paul has been passionate about content writing since 2010. During his career he has managed to accumulate a lot of experience in covering various fields, while focusing on cyber security and technical writing. Paul has always been fond of technology and the digital world, thus, conducting in-depth research and learning what’s happening around is a major part of his everyday life. Currently, he is a content director at Incogniton, where he enjoys helping the staff to better their skills and come up with catchy and useful content for the audience.